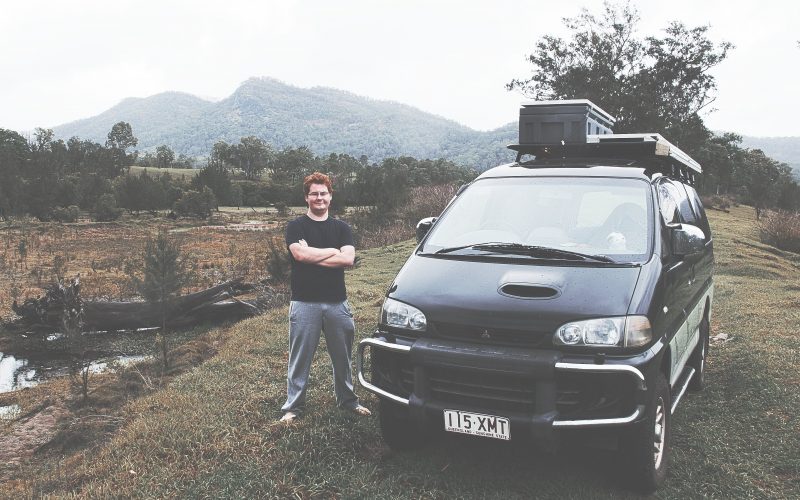 After the success of my last rally video, I was fortunate enough to be hired back for another event. This one was held in Manumbar QLD.

I purchased a new Sony RX10 MKIV for the job, as I wanted to be able to record slow-motion video.

A week before the rally, there was a gathering at the mechanics where all the cars were checked to ensure they were safe and conformed to the rules. I went along to film some interviews with the contenders. This was the first time I’d done interviews, but it went really well.

I drove up to Manumbar on Wednesday, and found there was no phone reception. This was a challenge because I still had to run my IT business while I was away. It was a good opportunity to try my new Satellite Phone.

I bought a 2nd hand Inmarsat Isatphone off Gumtree for $200, and signed up with Pivotel for their $40 per month plan. The outbound calls are a few dollars per minute, so I diverted my mobile phone to the satellite phone, and then would text people for 50c and ask them to call me back, for free.

It worked really well, and while there’s a bit of a delay and the quality isn’t great, its good enough! You just have to not be in too much tree cover for it to connect up.

The rally organizers gave me a radio, which I had no idea how to use, nor did I really understand what was being said on it. Thanks though! Oh, and the van ticked over 210,000km.

The rally crew and volunteers were all very friendly, on the day before the rally, I went for a drive with them to scope out some good spots to film.

Friday morning, the rally began, and wow it was intense! I was dashing around trying to keep up with everyone. My Inspire 2 performed brilliantly, I was chasing the rally cars at 80-100kph and getting some amazing shots. I also got some great slow-motion video with my new Sony camera.

The van performed great, but this was really the ‘last hurrah’ of my house batteries. Constantly charging the drone and cameras took a heavy toll on them, and I was fortunate to be able to completely recharge the van batteries at the campsite on Friday night for another big day on Saturday.

Saturday went even better, and the last stage of the day presented a real challenge for me. The route went through a large, deforested clearing, and the cars would be zipping along a high ridgeline. I could see in my ‘minds eye’ the awesome shot I could get of the rally cars as they teetered on the edge of the mountain.

However, there was no way to get my van up there, as you aren’t allowed to drive on the course, so I’d have to carry all my gear. It was a very steep hike carrying about 20kg of camera and drone gear, and I’m no athlete!

It was totally worth it though, I got two fantastic shots which I used to wrap up the video. That evening, we returned to the campground where the winners were announced, and I got some great B-roll of the acceptance speeches which I used as a voiceover. This was one of those times where I could see the video taking shape in my head, I think a result of more experience doing this kind of thing.

I’m really proud of how this came out, it was a huge effort and was really well received by the rallying community.

Looking back at it, the only thing I would change is the colour grading. I didn’t really know how to balance the colours for my ND filters or use LUTs. I’ve learned a lot since then!

After the rally, I went camping at Kenilworth with my friend Cameron. It was the first time using my new water tank and hot water system.

About a month later, I went back to Mann River, in northern NSW. I free camped for 3 nights. It was a good test of the van because it rained the whole time!

If you’ve ever been camping, it can be pretty miserable when the weather is bad. Despite this, I really enjoyed the trip. The river was very low unfortunately, but it was relaxing sitting in the van and listening to the rain.

This is when I knew I had really made a good choice with the van, I was thinking of my early camping attempts with my sad tent, and what a contrast it was to be happy (and dry!) on my trip.

After I got home, I gave the van a good wash, ready for my next adventure!